In early September 2022, partners of the TOMORROW Project gathered in the historic city of Brașov for the second edition of the city’s International Green Cities Forum FOV. The city left an impression on the visitors, not only for its exceptional charm, but also for the bold political action and important steps it is taking towards climate neutrality.

Nestled in the green mountains of Romania, at a three-hour drive from the capital Bucharest, Brașov is a medium-sized city of around 300,000 inhabitants. With a city centre rich in heritage, full of gothic churches, quaint alleyways, medieval fortifications and stone buildings, Brașov is more than just a beautiful historic city: it is also a city of tomorrow, striving to become resilient and future-proof, and to serve as a model for Romania’s – and Europe’s – future.

This is why, for a second year in a row, the city organizes a Green Cities Forum FOV (FORUMUL ORAȘELOR VERZI) for international and national audiences: To showcase Brașov’s efforts to reach climate neutrality while discussing the transition with key actors from the country and the rest of Europe. Beyond the international conferences of the forum, this event also aims at raising awareness and engaging the local population through activities for the general public, such as a bikers’ parade and a green film festival.

Last year was the first edition of the Forum, which focused on the Fit for 55 and climate neutrality targets, with discussions around topics ranging from mobility to waste management. This year’s forum, rooted in the current context of the raging war in their neighbouring country Ukraine, unavoidably tackled the subject of energy, the theme being "Find your Power". In times of energy crisis such as these, local authorities have been thrust onto the front line of the crisis. In Brașov, local leaders are tackling the question of energy with the same boldness as other climate-related ambitions.

Before the start of the Forum, the TOMORROW delegation was welcomed in Brașov by the mayor, Allen Coliban, and deputy mayor, Flavia Boghiu, who made it clear that a key point in their agenda since their election in 2020 is to become the “Green Capital of Romania”.

And they are well on their way, with half of the city’s bus fleet already being electric and the largest area of forest in an urban area in Romania. Additionally, the city just recently bought an old, abandoned coal plant, and plans to turn it into a source of green energy for the city.

In the past years, Europe has increasingly recognized local authorities’ key role in the fight against climate change and reinforced support for local initiatives. The mayor is ensuring that Brașov seizes on the opportunities and leverages this funding coming from Europe (such as the European Cohesion Policy and the Recovery and Resilience Facility), to bring to life mature projects that match and reflect their ambition.

Beyond climate questions, the current leadership has showed that in times of crisis, they are apt to step up and implement solutions. When refugees started flowing in by the thousands across the border when the war broke out in Ukraine, Deputy Mayor Flavia Boghiu took matters into her own hand and transformed an underused municipal building (an innovation lab and incubator) into a temporary center for Refugees, the CATIA Refugee Center. There, they mobilized a wide-range of civil society actors, organisations, volunteers and facilitated administrative and bureaucratic procedures for incoming refugees to find a permanent place to stay.

The visit of the TOMORROW delegation to the CATIA center was an inspiring way to see how local leaders can spark action and involve citizens and key actors faced with a crisis. This kind of mobilization is what the TOMORROW project has aimed to foster in cities to address the climate crisis.

As one of the first signatories of Covenant of Mayors in 2008, Brașov developed their Sustainable Energy Action Plan with the time frame 2010 to 2020 and a target of 20% reductions. Since then, they extended its commitments to 2030, by signing the new Covenant of Mayors for Climate and Energy and committed to reduce its CO2 by 40% before 2030. In 2021, they aligned with the Green Deal and renewed its pledge, committing to reducing by 55% before 2030, and their Climate Action Plan is now under development.

In this context, the TOMORROW project pushed Brașov to broaden even further their horizon to 2050. While developing their new 2030 SECAP, Brașov’s energy agency and partner of the TOMORROW project, ABMEE, worked closely with the municipality on developing a vision for 2050 with focus on a few key sectors: municipal buildings and equipment, residential buildings, public lighting, solar power, cogeneration of district heating and transport.

Opened by the mayor of Brașov himself, the TOMORROW session at the Green Cities Forum aimed at showcasing and presenting this 2050 roadmap and the processes that it set forth, alongside other TOMORROW cities.

Some of the key achievements in these sectors so far include:

The Roadmap paving these actions towards climate neutrality was not developed by ABMEE and the municipality behind closed doors. As an essential part of the TOMORROW project, this vision for 2050 was co-created together with citizens and key stakeholders.

The TOMORROW process started with a comprehensive Actors Mapping. By turning to specialists to analyse, evaluate and propose necessary projects that could gradually reduce fossil fuel dependence, ABMEE was able to identify these key sectors that became a key part of their SECAP and roadmap. This way, they have engaged diverse actors from across society to align and integrate their strategies.

In 2020, as one of the methodological recommendations of the TOMORROW project, Brașov formed a Transition Team emerging from this process of Actors Mapping. This team was built on an existing network, and complemented with companies representing sectors in the city who have a major influence on the energy transition at the local level. This means concretely that the Team brings together local authorities with representatives from key companies for transport, electricity distribution, natural gas, public lighting, waste management, design, and more.

One of the transition team’s member, for example, is the private energy company Bepco, a key player for the future of heat production in Brașov who has helped the city develop a Local Heating Strategy. While the heat network is managed by the municipality, it is Bepco that is in charge of producing heat and electricity through high-efficient cogeneration utilizing natural gas as fuel. Transforming the former coal-based cogeneration producer in Brașov to a gas high efficiency cogeneration in 2010 resulted in a reduction of the producer’s CO2 emissions by 82%. The company is also engaged in exploring and implementing renewable sources for heating, predominantly biogas, biomass and hydrogen.

An important role of the Transition Team is to test tools and implement innovative methods to involve the civil society at all stages of the SECAP development. For the changes written in the SECAP to take place across different areas of society, they need approval, support and participation of the local population.

In an effort to engage citizens in the Roadmapping process, ABMEE organized citizen focus groups around the development of a roadmap, to integrate the local population's vision of for their city in 2050. To their surprise and delight, it turned out that this vision was very much in line with the priorities of the 2030 SECAP. Their ideas can be found in all the different sectors that the SECAP is tackling as well as projects envisioned by the private sector and identified through the transition team.

However, one of the big challenges that Brașov still faces is the gap between the vision – which citizens are onboard with – and the actual steps that must be taken to reach this vision. Although in focus groups, citizens supported the long-term vision of transforming local energy systems, in practice, a questionnaire sent out to the city population showed that they are reluctant to integrate the city-wide district heating system part of the SECAP’s key areas of action.

Change in mentality is always the most difficult challenge to tackle. As a post-Soviet society, many people in Brașov still associate collective energy systems with the unreliable systems that existed under the Communist Regime. This makes it trickier to convince Brașov residents to abandon their individual boilers for a collective heating system, no matter how much more reliable and energy-efficient your system is today. 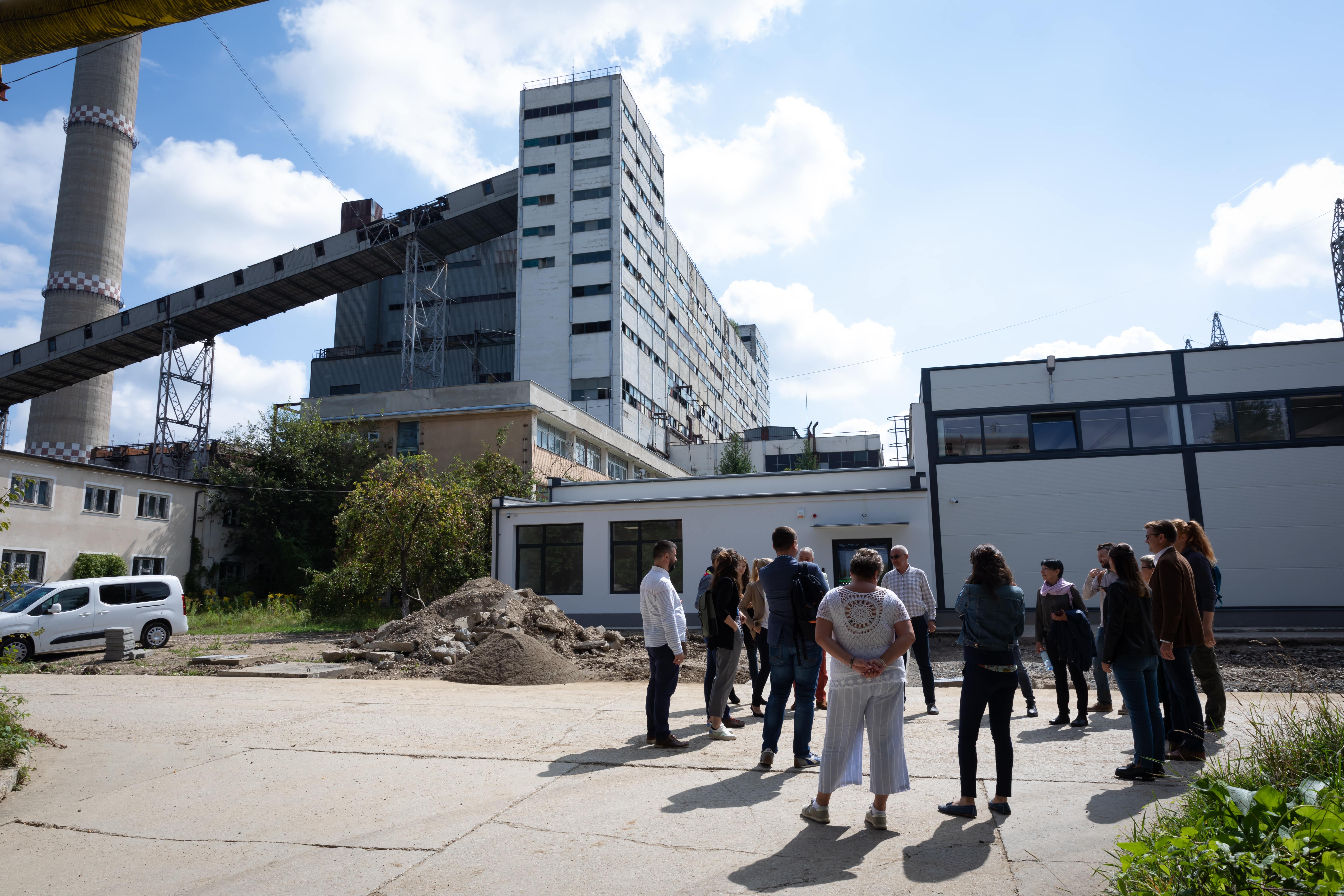 These public consultations, however discouraging they may be at first for local authorities, are important to give a better idea of where to invest communications efforts. If local decision-makers want their SECAP to be successful, they must launch a communications campaign that addresses this heritage and strives to change perspectives. Only then will the local population’s short-term preferences align with their long-term vision of a carbon-neutral Brasov.

Exchanging Knowledge with other Tomorrow Cities

As the deputy mayor Flavia Boghiu highlighted, “all cities face the same challenges”. Although these may slightly vary according to specific context, like the challenge cited above, many of the same roadblocks are felt in some way or another in cities across Europe.

This was clear during the TOMORROW session of the FOV Forum, as well as throughout the entire study visit. Valencia brought some interesting ideas and examples of what they are doing in their city to inspire Brașov and help them tackle a few of its challenges. Among these, is their robust programme dedicated to helping citizens with questions relating to energy in the city, with a one-stop-shop (their Oficina de Energia) that gives out tailored support and advice for retrofitting and making your home more energy efficient. This type of service is all the more important in the context of the current crisis, as it supports the energy vulnerable with more than just financial support (as Brașov is doing now), integrating them in this shift towards renewable, ensuring a just transition that leaves no one behind.

As Brașov focuses more of its efforts on energy, as outlined in their 2030 SECAP and the 2050 Roadmap, they can learn from Valencia’s approach: dedicating a greater part of municipal staff and resources to the question of energy, starting with creating a department dedicated to the energy transition, like Valencia with its Councilor of Climate Emergency and Energy Transition.

To learn more about Valencia's, Brașov's and the other TOMORROW cities’ transition, while discovering the project's methodological guidelines and policy recommendations, join us for the TOMORROW final conference!