The Deputy Lord Mayor of Dublin, Councillor Tom Brabazon, and the mayors of the other three other local authorities in Dublin signed up to the 'BreatheLife' campaign and called on citizens to be 'Climate Brave'.

By signing up to the campaign, Dublin will be joining 76 cities, regions and countries around the globe in committing to bring air quality to safe levels by 2030 and collaborate on clean air solutions. 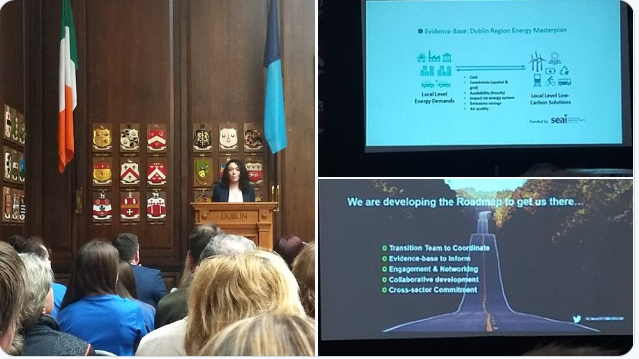 As part of her presentation, Codema’s incoming CEO Donna Gartland gave an overview on the current challenge facing Dublin in becoming a carbon-neutral capital, and revealed that the county will need to save the CO2 equivalent of taking 57,000 cars off Dublin’s roads every year for the next 30 years, in order to meet this challenge.

Donna then discussed Codema’s role in the TOMORROW project, and how  - through evidence based research and meaningful engagement - we can develop a transition roadmap for Dublin, which will set us on the right course for a holistic energy transition. This will also be supported by the development of the Dublin Regional Energy Master Plan, the first of its kind in Europe, which is creating cost-optimised, spatially-possible and technically-feasible pathways for Dublin to achieve EU climate and energy targets to be carbon-neutral by 2050.