In June 2022, TOMORROW Project partners gathered in the pilot city of Mouscron, Belgium, to see up close the efforts the city has been leading developing their transition roadmap together with citizens and local stakeholders.

Mouscron is a small Belgian city of about 60,000 inhabitants in the French-speaking region of Wallonia, resting right on the border with France, next door to Lille metropolitan area. Historically a textile city, it keeps a strong working-class identity. Small, sturdy brick houses line the streets and towering old brick chimneys remind passersby of its industrial past. Now primarily an agro-industrial city, agricultural fields spotted with a few factories surround the city centre.

With this scenery, at first glance, Mouscron may seem an unlikely candidate as pioneer of the ecological transition in Belgium. But as you explore the city and get to know the inner-workings of the municipality more closely, it unveils a great amount of “green” potential. Behind the stoic brick houses, the city of Mouscron has been hard at work on preparing their city for the energy transition since signing the Covenant of Mayors ten years ago, in 2012, when they also developed their first action plan. TOMORROW’s partner Magali Viane, head of projects for the Energy department at the city of Mouscron, showed us how this small industrial city has untapped its “green” potential in their efforts to pave the way towards climate-neutrality. 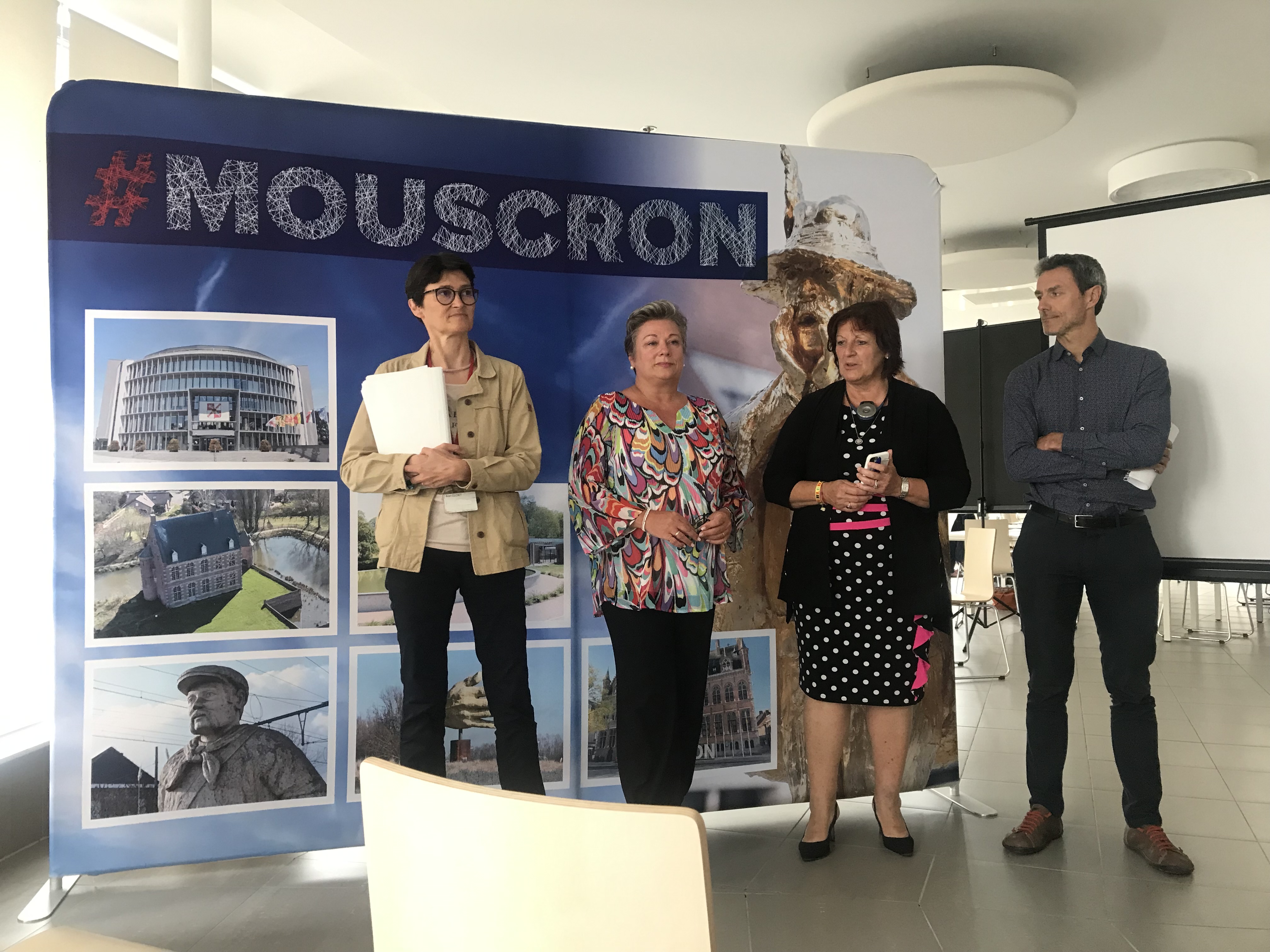 From train rides to colorful caravans with Sustainable Development Goals (SDGs) themed cubes, a French Fries food truck and a geocaching adventure through the city, the partners of the TOMORROW project did not have a moment of boredom during their stay in this small Belgium city. But this was not just fun and games: it was a way for us to experience first-hand the strategies and actions that the city has put into place to engage and raise awareness around their ecological transition.

Here are a few highlights from the Study Visit and lessons that we can take from Mouscron.

The basis of this strategy was presented to us by members of the Transition Team. Putting together a Transition Team was one of the actions recommended by the TOMORROW project for cities to optimize the governance efforts towards climate neutrality. Hence, a group of 10 to 12 of the Mouscron’s city staff from different departments were brought onto this team, which was then approved by the political board and work under the Mayor’s cabinet.

The team is in charge of developing transition-focused actions across the municipality’s departments, which feed into weekly directional committee meetings. We could already see the dynamism that this new team brought to the table, clearly breaking ground and bringing a fresh approach to the city’s governance thanks to its transversal nature. Too often, local governments work in silos that make it difficult to align transition-focused actions that fundamentally need a cross-departmental approach and implementation in order to be effective, just and coherent. Mouscron's Transition Team works transversally to cut across these silos and align these actions.

Here in Mouscron, we saw first-hand the impact that having this transversal Transition Team could have in terms of uniting the city’s staff around the transition's goals. Two members of the team’s communication cell presented their efforts to first and foremost raise awareness across the city administration's different department around sustainable development and the energy transition – what it means and what needs to be done.

Raising awareness is the necessary first step for the Transition Team to then be able to lay out actions and strategies that all the departments can get on board with. Workshops were organized for agents from all departments, regardless of specialty, responsibility or rank, in order to align everyone around the 17 SDGs.

Before all else, the team uses videos and visuals to catch the agents’ attention around the urgency of climate action. Then, to make the workshops more engaging, the team kicks off the group activities with the help of gamification tools, using puzzles and colourful building blocks in order to educate around the meaning of the different SDGs. Afterwards they gather the workers into groups to discuss how to realign their department’s actions and strategies with these goals. An interactive and visual barometer was developed in order for civil servants to gauge how their projects measure up with sustainability goals. 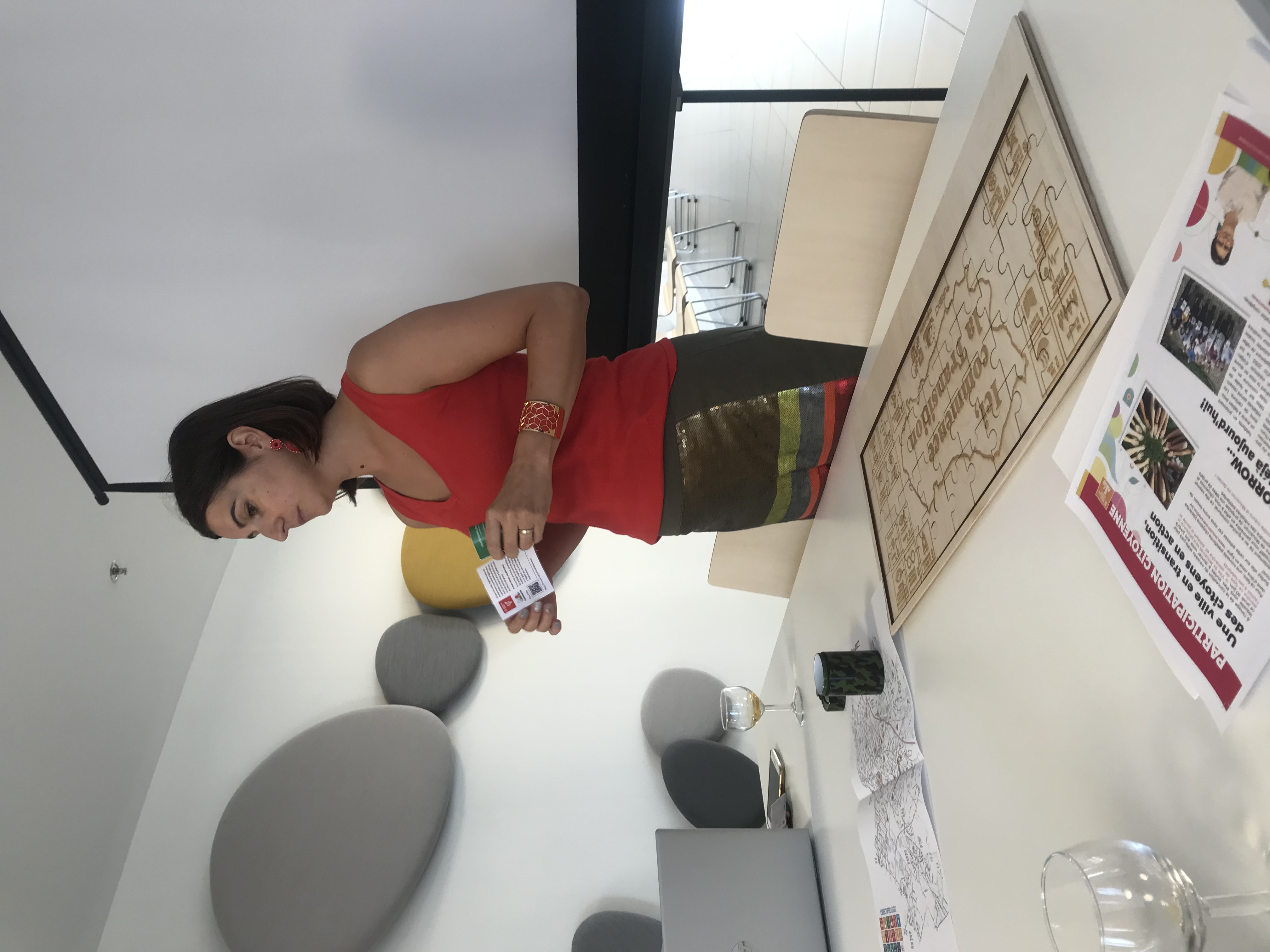 After this initial internal awareness effort and campaign, the communications transition team will be ready to turn outwards and focus on citizens. Again, the goal is to first and foremost raise awareness about the SDGs and get people thinking about how they can engage with city efforts around these goals.

For this, the Mouscron team was ready to launch a geocaching game around the city open to all, where each cache was a different SDG. We also got a glimpse of some of the actions already put into place by the environmental cell of the Transition Team, targeting the city's younger generations, also around SDG goals, through schools and youth organisations. A moveable exhibition in the form of an ODD caravan (SDG in French, "Objectifs de Developpement Durable"), big colourful ODD cubes, radio shows, ODD lollipops, drawing boards, fun videos… these were just some of the activities that have already started to bring the fundamentals of Sustainable Development to Mouscron’s citizens in a vibrant, interactive and playful way. Through these activities, there are multiple ways in which citizens can submit their ideas for actions – ideas which are later assembled and presented to the city’s elected officials. 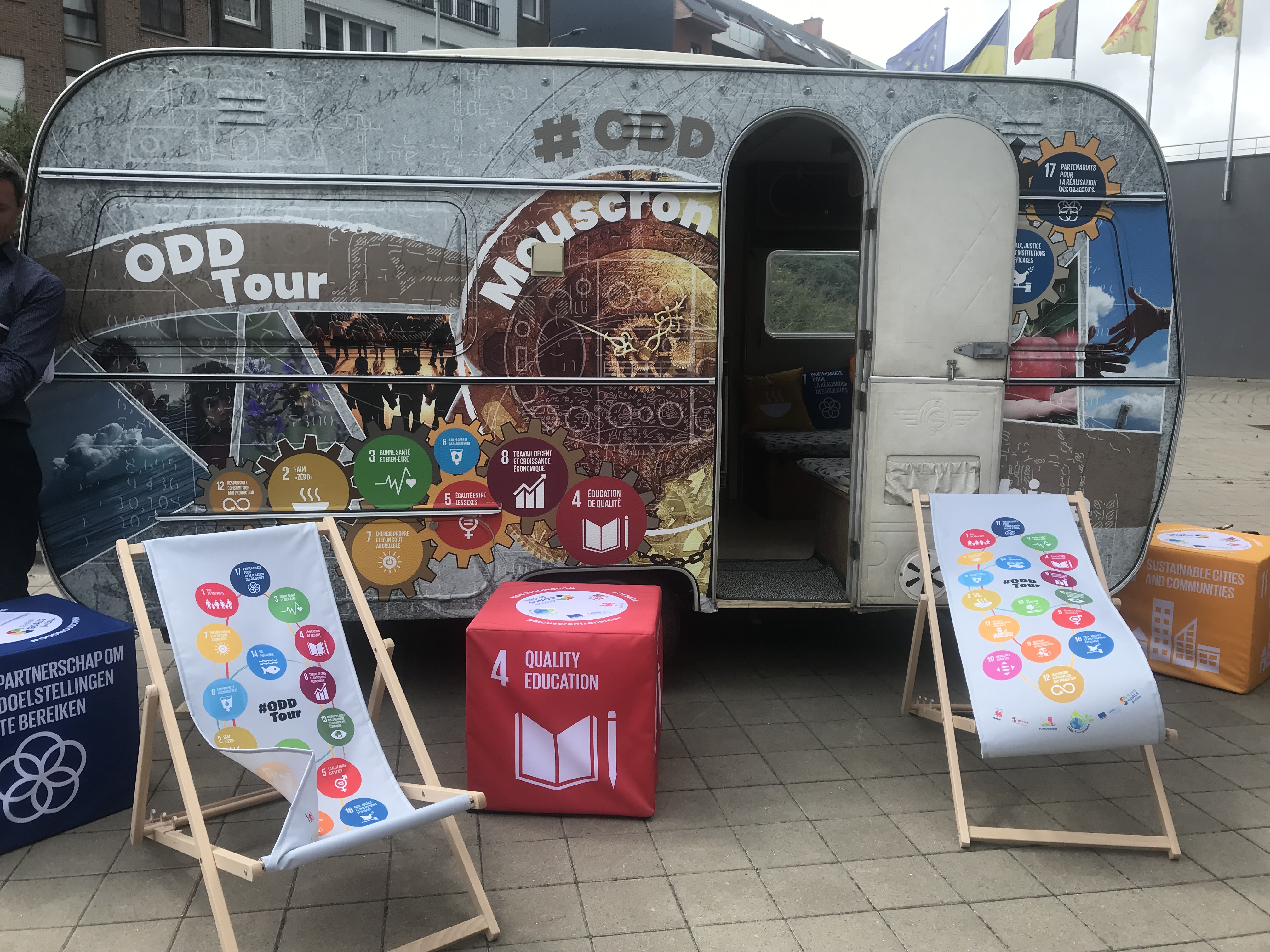 Our stay in Mouscron also coincided with the launching of the city’s new participatory transition website (mouscrontransition.be). On this digital platform, citizens can visualize all of the city's transition-oriented actions (solar panel installations, community gardens, etc.) that are mapped out and can be explored geographically. Beyond just learning about these projects, citizens can also provide feedback as well as contribute inputs by adding their own project to the map, or by feeding an "ideas box". The very implicated folks may even be elected, through this website, as “transition geniuses” in their neighbourhood, becoming community transition leaders.

Besides hearing from members of the transition team and directly testing the geocaching and ODD caravan, we also got to hear from one of the city’s biggest companies and industrial players of the area: Mydibel potato company (explaining why we then got our very own French Fries food truck!).

The CEO of Mydibel demonstrated how the company is working towards carbon neutrality, zero waste and complete energy independence in their production cycle. Since 2006, the company has been focused on sustainability, turning their waste into biogas, to simultaneously reduce waste and green-house gas emissions. Now in 2022 they are working on developing a big green hydrogen project, and plan on creating their own energy facility.

Mydibel’s projects are interesting not only because they show how big industries and private actors can actively drive the energy transition and develop a green economy, but also because they work closely with the local government to integrate these projects in the city’s broader efforts towards climate-neutrality. 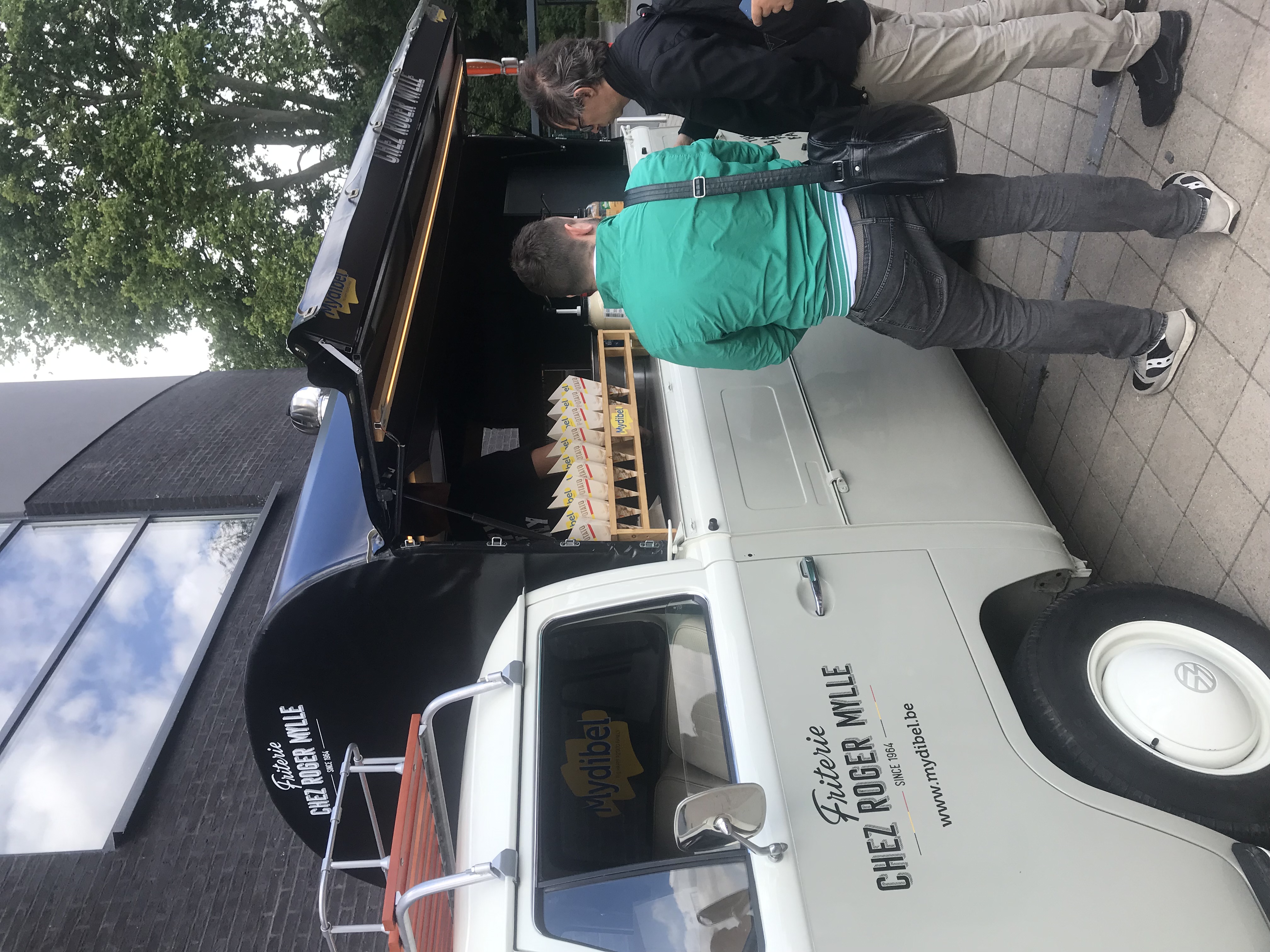 In the same way the Transition Team needs to be transversal to be effective, transition-oriented actions should permeate private-public boundaries and make sure that the two work together. Mydibel’s partnership with the city of Mouscron to, in future plans, provide some of the city’s fleet of trucks with their clean energy is one of the many examples of collaborations that optimize actions towards the green transition.

For this, it is important for the city to think of opening and nurturing spaces of dialogue with the city’s private companies and industries, in order to forge partnerships, hold them accountable and turn them into allies in their transition efforts.

Public agents, citizens and private actors… The last important piece of the puzzle is the politicians. The presence and active participation of the Mayor of Mouscron, Brigitte Aubert, and deputy Mayor, Ann Cloet, at TOMORROW’s sessions in Mouscron reflect the commitment of the elected official to the project’s goals and vision. As the first Walloon city to sign the Covenant of Mayors in 2012 and set targets, it is promising to see this commitment persists.

Local councillors have already reviewed their 6-year strategies according the Strategic Transition Plan and sustainability development goals. Now the Transition Team is trying to involve them also in awareness workshops and trainings as the city agents are undergoing. Time will tell us how these efforts pay off and if Mouscron’s politicians will be active participants of this new transversal governance structure put into place to tackle the transition. 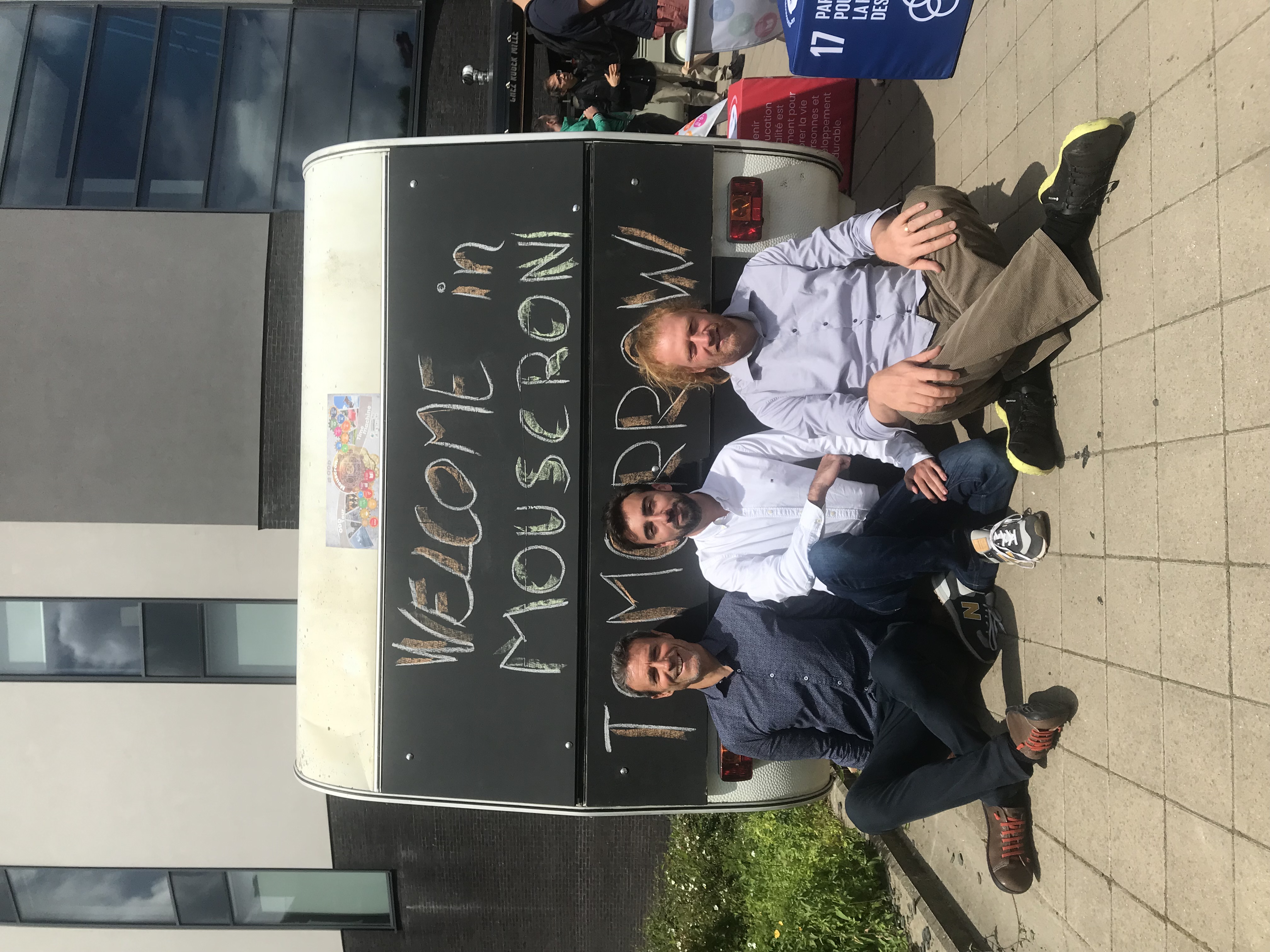