Three years ago, six European cities joined the TOMORROW project because they knew that for local governments to reach climate neutrality targets, they needed to mobilise their cities as a whole. At the end of the day, municipalities themselves are only responsible for 5 to 15% of their city’s emissions. So, in their plans for climate neutrality, city administrations need to look beyond decarbonising their own infrastructure. A truly ambitious city is one with a plan that tackles the other 85 to 95% of the emissions. A plan that, from the beginning, involves everyone: from private businesses, service providers, academia and non-profit, to everyday people.

This reflexion is what triggered the project. Six cities - Brașov in Romania, Brest in France, Dublin in Ireland, Mouscron in Belgium, Niš in Serbia and Valencia in Spain - knew that to be serious about climate change, they needed to mobilise everyone in their efforts towards climate neutrality. The goal of TOMORROW: to design a 2050 Roadmap to climate neutrality together with their city’s population and key stakeholders. The inspiration: two cities’ famous innovative processes for citizen participation, Leuven2030 and Nantes’ “Grand Débat”.

Collective mobilisation is the key to success in tackling the climate crisis.

Fast forward to 3 years later. The project has just ended. The 6 cities, now equipped with their co-created Roadmaps, are in very different situations than they were 3 years ago. Dublin and Valencia are now aiming for climate neutrality by 2030, not 2050, having become two of the EU’s Mission of 100 smart and climate-neutral cities by 2030. Brașov and Brest have upgraded their commitments to the Covenant of Mayors to 2050. Mouscron and Niš have radically changed the way their city administrations tackle the energy transition, despite lacking political support at times.

What happened over the course of these three years to trigger these changes? How did these cities’ efforts to engage everyone translate to renewed and raised ambition? Most importantly, what can other cities learn from their experience?

Collective mobilisation: why it’s so important

The often-radical changes that the transition demands must get collective support to be successful. In Serbia, the city of Niš was motivated to join the TOMORROW project after they suffered a backlash and massive protests following the first attempt to switch to a consumption-based heating system. From then on, they knew that if their Sustainable Energy Action Plan was to work, they needed to involve the people in the decision-making process from the start. This is crucial for any city striving to implement a just and inclusive transition.

It’s not just about communication, but about participation and new forms of governance: it’s about how to make people part of the transition, not as a last step when you are communicating at the end, but from the beginning, involving them in the process and in defining what they city needs to do.

Dublin quickly realized that there was a strong desire for participation in their city’s transition. In 2021, Dublin’s energy agency organized a survey to get the public’s view on how to move Dublin away from fossil fuels. The survey gathered more than 1000 responses from people living and working in Dublin. 65% of respondents said they would like initiatives that “allow people living and working in Dublin to discuss, propose and vote on actions that could be presented to local authorities and national government”.

In their effort to engage citizens, Brașov organised focus groups during the first edition of the Green Cities Forum. Here, they collected the people’s vision of their city in 2050. To their surprise and delight, their ideas were aligned with the main actions that the city identified working on their revised Action Plan.

In the same spirit, as part of their engagement strategy, Valencia launched an event called “Mi Barrio en Transición” (My Neighbourhood in Transition). The event gathers people from a given neighbourhood to share their ideas and desires for a fossil-free city.

In Mouscron and Brest, citizens have contributed their ideas through public events as well. Mouscron organised a storytelling evening, as well as a participative forum. And at Brest’s “Village Climat Déclic” event, there was a display of local initiatives and actions in a fun “eco-village”. Brest also invited its citizens to contribute their ideas by painting a giant Climate fresco.

In Dublin, Codema created the brand Zero Together – under which the survey was launched – as a pillar of their engagement strategy. Recently Zero Together ran a campaign to collect people’s vision of a fossil-free Dublin through “postcards” sent from an imagined 2050.

Codema is currently developing a Zero Together website where people and businesses in Dublin can pledge their commitments and get involved. Similarly, Mouscron had already launched a participative website where citizens can add their initiatives to a map of citizen projects for the transition. Valencia is also in the process of creating their own, to rally commitment around their 2030 Mission and to guide people towards collective actions they can take for the climate.

From the inside out: reshaping your internal governance to engage better and bigger

The first step to reaching this collective mobilisation however, is to set up a transversal team within your city’s administration. It’s clear that to implement the cross-cutting solutions needed to tackle climate change, cities must start by reshaping their governance model. Thus, setting up a transition team is the first recommendation from the Methodological Guidelines on transition management stemming from the project.

Learn the basics of setting up a transition team.

And they are clearly effective. Considering that all six cities listed their transition team as one of the main – if not the greatest – achievements by the end of the project. It may not be the flashiest, most visible result. But it is the most impactful on the long run, permanently changing the way each city manages its transition.

Read more on how the transition teams brought change to each city.

2050 Roadmaps: long-term visions to widen the scope of action

Learn more about this approach in our Methodological Guidelines.

In Dublin, for instance, the transition team had to think beyond the realms of possibility. They carried out activities of visioning through guided meditation and creative modelling of their future city (out of clay!). Pushing the team beyond their comfort zone into a completely creative space, allowed them to think outside of the box.

We would not have talked about 2050 without the TOMORROW project. Without everyone knowing that you have to plan ahead, it’s hard to tell people what they have to do. Talking about 2050 gave the chance to discuss even the craziest ideas and look for other ways of funding, different sources, to identify the financial lines and new funds.

Discover the cities’ Roadmaps here, the result of this 3-year process!

From vision to action: getting key stakeholders on board

Thinking outside the box gave cities a chance to think in broad and comprehensive terms. Which gives the transition team a clearer idea of whom to engage, on what front and when. The next step is then to get this wider set of actors on board.

Brest Métropole managed this by developing a commitment charter among the stakeholders of the territory. They also created coalitions of different actors around specific topics (mobility, waste management, energy, etc.). And lastly, they issued calls for citizen micro-projects. These actions brought about cross-cutting coalitions, more municipal involvement, and initiatives born from inspiration of other citizen projects. To consolidate these collective efforts, Brest Métropole organised a local COP – Conference of Parties – in November 2022.

When Valencia applied to become an EU Mission city, it leveraged the processes started during TOMORROW to strengthen its application. The transversal Transition Roundtables (i.e. their transition teams) helped organise the entire city around Valencia’s 2030 Mission. Thanks to their previous engagement efforts, people knew Valencia was serious about climate neutrality. And their raised ambitions motivated more people to get involved. Thus, once they successfully became a Mission city, they were able to expand on this engagement and create an Alliance for the Climate Mission. Member entities, citizens, organisations ambassadors and influential figures that are part of the Alliance showcase the breadth of support of the Climate Mission.

In a similar effort, Dublin uses its initiative Zero Together to engage businesses and key stakeholders. At Dublin’s Climate Action Week in 2022, Codema co-organised an event with Patagonia to present Dublin’s energy transition Master Plan to a wide range of businesses. This was a great first step to inspire businesses to join the Zero Together movement away from fossil-fuels.

All this, of course, would not have been possible without political commitment. This is an essential building block to start any kind of engagement process for the transition. Lacking such support can cause real challenges. As the case of Niš demonstrated, when they lost political backing after local elections half-way through the project. And this became a huge roadblock to any work and action that the transition team wanted to carry out.

From the beginning, Valencia ensured that the Mayor’s office supported and even lead part of the effort. This made the rest of the engagement process much smoother. And it is the main advice that Valencia now gives to other cities embarking on a similar journey: make sure to ensure political support from the start.

The political ambition is also the first pillar of the project’s recommendations for local decision-makers. The Mayor of Brașov, Allen Coliban, has served as an example and inspiration for this. He renewed the city’s commitments to the Covenant of Mayors to 2050 and assumed a more ambitious target of reducing emissions by 55% by 2030. This ambition motivates and pushes the different members of the transition team to work harder.

Check out our recommendations to empower local decision-makers to become transition leaders.

And in the end, it’s this political support that will allow these processes to materialise. Because, once the project is over, the pressing question is how to integrate these collective visions and perspectives into local policy. This happens only if politicians endorse the 2050 Roadmap and integrate it into the cities’ action plans. And on the long-term, they must commit to working with the transition team, for citizen and stakeholder inputs to contribute to the evaluation and revision of the action plans.

Sure, collective mobilisation is not an easy task. The TOMORROW cities faced many challenges and uncertainty along the way, and still have many ahead. But that is also a sign that they are on the right path.

There has to be an element of uncertainty, otherwise something is going wrong.

Local leaders and decision-makers are on the front line of the climate crisis. They are also well placed to engage everyone in their city faced with this crisis. And to make a real difference.

The global fight against climate change thus starts with each city designing participatory processes at the local level. The TOMORROW project’s methodology can guide the way. And help you follow in the footsteps of Brașov, Brest, Dublin, Mouscron, Niš, and Valencia. 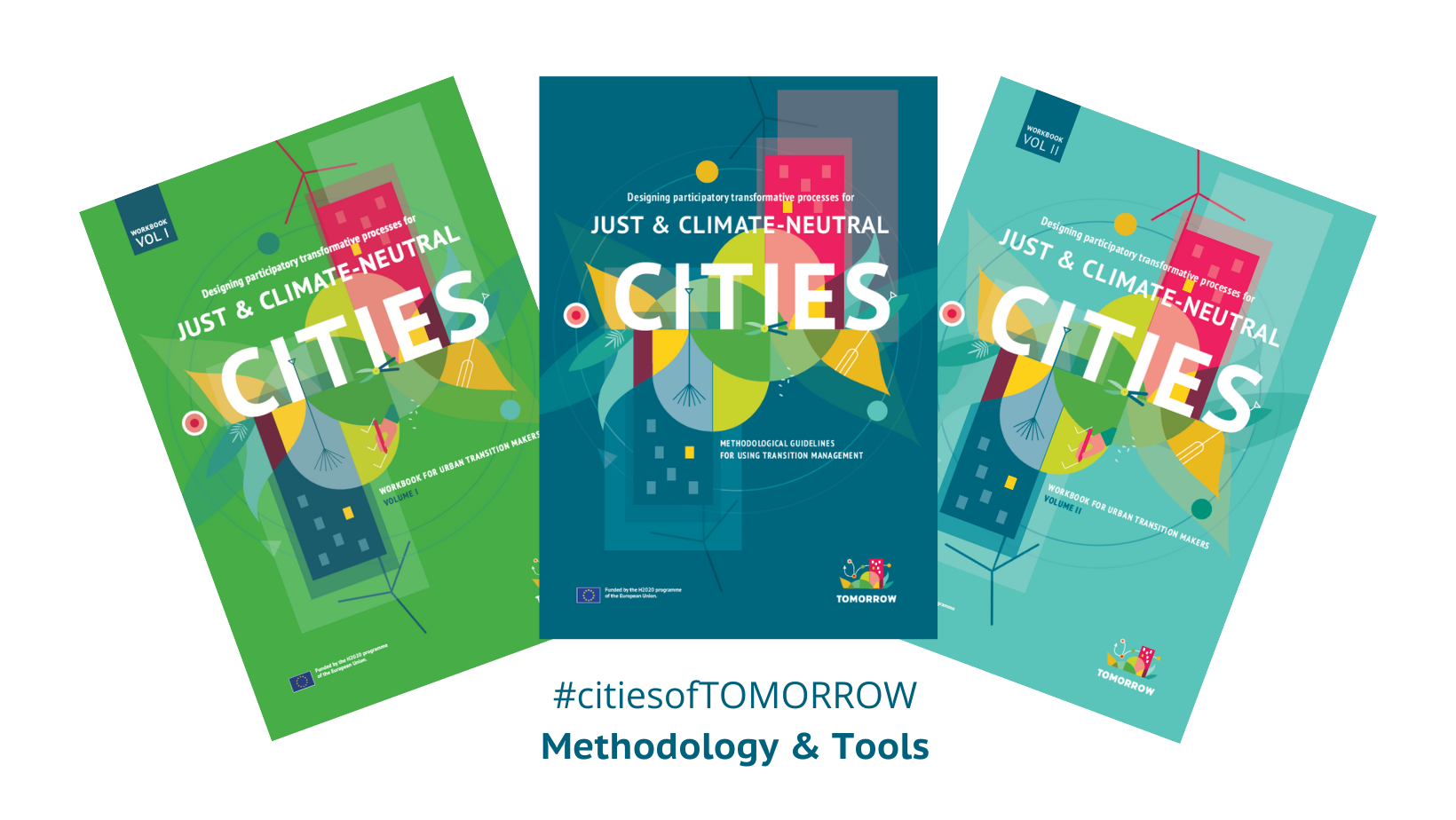 Get an overview of the TOMORROW Project, its key resources, the cities’ main achievements, and content to dive deeper, in the Final Report! There you will find the project’s essential learnings and advice from each city to get started on your own engagement processes.

Read the TOMORROW Final Report and rewatch the final conference to learn more about the project.